Many of the Psalms written by David were composed during this “caveman” period in the life of the young warrior. King Saul was obsessed with David seeking to take his life repeatedly. The fact of God’s protection and the recorded means of His protection of David are instructive.

While Chapter 23 is more of the same in one sense- in another sense it is unique. When linked together Chapters 23-25 marvelously demonstrate God’s providence. You have herein a wonderful illustration of Romans 8:28. David undoubtedly loves the Lord and is “called” according to God’s purpose. As a result, things “work out” according to “good” as defined by God’s eternal plan. The theme of Chapter 23 is discernible by even the casual reader. The topic of deliverance runs throughout the section. David is told to proceed with his motley troops to defend the city of Keilah from the Philistines. He is told that the enemy will be DELIVERED into his hand (v.4). King Saul hears of David’s whereabouts and thinks erroneously that God has DELIVERED David into his hand (v. 7). In verse 11, David is informed of the Lord that the rescued city fathers will DELIVER him to Saul if he seeks safety among them. (They will play the Judas.) The historical fact and complimentary divine truth is declared in verse 14. God did not DELIVER David into the hand of Saul, even though Saul sought him daily. Finally, the Ziphites invite Saul to come to them and promise to DELIVER David to him (v. 20). The chapter ends with David being surrounded by Saul’s army. David appears to be out of options. Then, in terms unspectacular, a message to Saul of another Philistine invasion elsewhere “calls off the dog.” David is providentially DELIVERED! 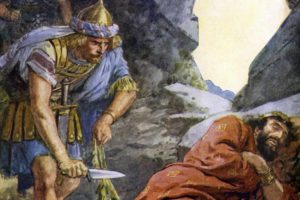 In Chapter 24, Saul is back at the hunt. David has so-called opportunity. David’s men not only thought he had a marvelous opportunity but also said the opportunity was from the LORD (v.4). The fact that David was tempted by the words of the men around him is evident by the fact that he reached out to cut off a piece of Saul’s robe. But David was immediately smitten of heart and quickly relented of doing any further. His spiritual heart attack returned him to the correct understanding of God’s providence. He would not exercise his own hand against Saul. He knew that was not God’s way. Ironically, since David did not listen to the voices of men around him, he could appeal to Saul not to listen to the voices of men around him (v.9). There results a “peace in the valley” of the temporary variety between Saul and David.

In Chapter 25, Samuel dies. The main course of the chapter is devoted to the way in which God protects David from avenging himself upon an abusive power broker named Nabal. Abigail, the wife of Nabal, demonstrates discernment and daring as she intervenes (v. 18). Her speech to David is rich in reference to the former Revelation of God concerning him. David is brought back to what we might call the mental perspective of Romans 8:28. (See verses 32-35.) Nabal died and David took Abigail to be his wife. He also took another wife and lost his marital connection to Saul’s kingdom when his first wife Michal was given to another man.

Now, with the summary in -hand let’s ask some disturbing questions about this section:

Why does God allow the conflict between Saul and David to drag on at all? Why does it seem that David is pressed to the end of himself again and again before God intervenes? Why did God smite David’s heart when he thought to take out Saul, and yet not smite him when he became a polygamist? Why does the death of godly Samuel get no more then a mention? Why does Nabal’s death comparatively get so much Biblical press?

The answer is: God’s providence is exercised according to God’s eternal plan!

It is important for us to keep our theological terms precise. In no way could God’s ongoing protection of David be called miraculous. There is not any suspension of early time/space continuum nor is there any new Revelation. David’s deliverance and protection is evidence of God’s providence. Another important thing to note is how God’s providence functioned throughout the period. There was no thunder or lightning, no angels sent to ride chariots of fire. Chapter 23 ends with the equivalent of a phone call made to an enemy in hot pursuit. Chapter 24 has the enemy using the restroom in military headquarters. Chapter 25 has another enemy dropped without punch.

All of these things illustrate how God providentially works. Things work out according to God’s eternal plan. How things work out is seldom spectacular and sometimes completely unknown.

1. Like David, we have a “calling” that involves personal salvation (deliverance) and public serive to an assigned flock gathered around us.

2. Like David, we sometimes lose perspective of that calling in times of distress and difficulty. God certainly could remove all such ongoing conflict but chooses not to according to His eternal plan and purpose.

3. Like David, there are times when God will intervene and stop us from doing that which is inappropriate and sinful (smitten heart). There will be other times when He will not intervene. This too is according to His eternal plan and purpose.

4. Like David, we must learn to govern our thoughts and actions according to that which God has revealed to us in His Word. God is perpetually working according to His Word, whether we see it or not.

5. Like David, we must eliminate the voices around us that would take us away from the will of God regardless of their love and commitment to us.

6. Like David, we will confront the same enemies again and again, even though there will be periods of peace along the way.

7. Like David, we must put the lessons learned into a form that will benefit others (The Psalm

Having a firm grasp of the providence of God:

1. Reminds you of the fact that Scripture is thematic. The reason why things are, or are not, recorded and the reason why God does something one time the next time not, relates to the story line of redemption. The Bible is about the presentation of Jesus Christ. He is the only “hero.” He is the fullness of God expressed.

2. Reminds you that God is under no obligation to reward His servants during the days of their earthly sojourn. Samuel’s one verse obituary may seem a poor reflection of a godly life, but Samuel’s life is not done with. He will be resurrected to enjoy the coming kingdom. Faithful service is always rewarded in God’s time!

3. Reminds you that God will not fail to deal with everyone in justice. 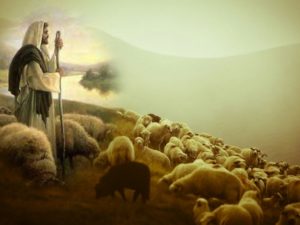 David appears to get a “2 wives for 1” deal at the end of Chapter 25. His polygamy is never justified, and it would be amiss to think that God just looked the other way. David has and will answer for his depature from the standard of God revealed. But his polygamy in no way prevented the progression of redemption- and so the justice of God was and is delayed.

Above all, we are reminded that man’s schemes cannot thwart God’s eternal plan in Jesus Christ. We are laborers together with God! 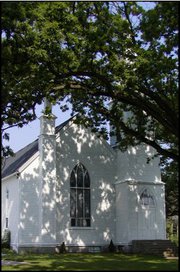